I have a long list of bookmarked eBay listings of Milton Keynes historical ephemera which I try to collect when funds allow. Most of my Milton Keynes postcards are unused, however this one I purchased for its photo montage of the Shopping Building had been used by a local resident. 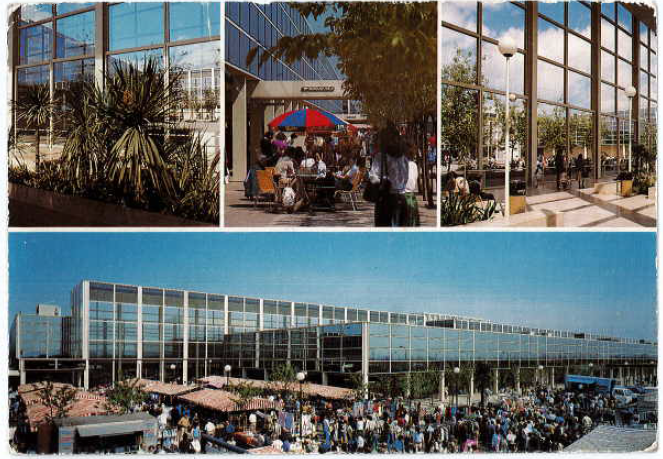 The Shopping Building opened in 1979, and Milton Keynes Development Corporation heavily promoted the building in national advertising as a local landmark as well as a social hub for the city (I wrote about this history in a 2017 journal article.)

The postmark on the back of the card is not legible, however the card design dates back to the early 1980s when MKDC were promoting the building. Some of the photos appear to be ones used in the 1980 Architect’s Journal issue commemorating the design of the building.

The message describes one young family’s experience of moving to a newly constructed part of Milton Keynes.

In order to maintain their privacy I won’t share the text in full, however they describe “burst pipes, gas leaks and electric, its been no joy [since moving in].” They also suggest that the recipient of the card, possibly a family member, should not “come down” to visit yet as “we haven’t got any carpets as the dust is quite thick.” Finally the postcard is full of detail about the new house because “the phone [has not been] put in” so the sender has not yet been able to call.

Given the estimated date of the early 1980s, the problems which the writers describe experiencing with their new house suggest they may have moved into it while it was still being constructed.

Even though some early MKDC-built houses did experience problems with plumbing, etc, it sounds less likely to me that people would have been moved into a new-built MKDC house without carpets, a phone, or functioning plumbing, so I would lean towards this card being written by a family who had moved into one of the private new-build areas of Milton Keynes, or who were building their own home on a purchased plot, both of which would become more common over the course of the 1980s.

The overall goal for Milton Keynes in the 1970 plan was to have half owner-occupied, half rented housing. More publically built rental housing was constructed in the 1970s, and during the 1980s much more of the construction was by private builders for profit. This transition had been planned to some extent, however it was also expanded substantially as part of adapting to the 1980s political climate, and this visible embrace of the private sector and “home ownership” possibly helped the town survive as a state investment under the Thatcher governments.

My other favourite promotional postcard of Milton Keynes Shopping Building dates from the same period but is perhaps a less successful design.

While the first card shows off the combination of lush greenery and chrome, glass and marble finishing which was central to the Shopping Building’s design, this second card appears to be focused partly on Milton Keynes’ central boulevards, and partly on the amount of carparking they offered.

The below image shows one of the central promenades of the Shopping Building where the palm trees had been replaced with less lush and inviting cacti.

Both photos speak more to the charmingly mundane aspects of Milton Keynes’ life, particularly in the early 1980s. (My favourite inclusion is the older couple enjoying icecream on the bottom left.) A lot of Milton Keynes advertising from the 1980s was skewed more towards aspirational, exciting imagery, where this second card is a little reminiscent of Martin Parr’s Boring Postcards project. It also reflects an unironic enthusiasm about ordinary people’s lives in the centre of their town. I look forward to expanding my postcard collection from this period, as they are surprisingly rich documents to examine.